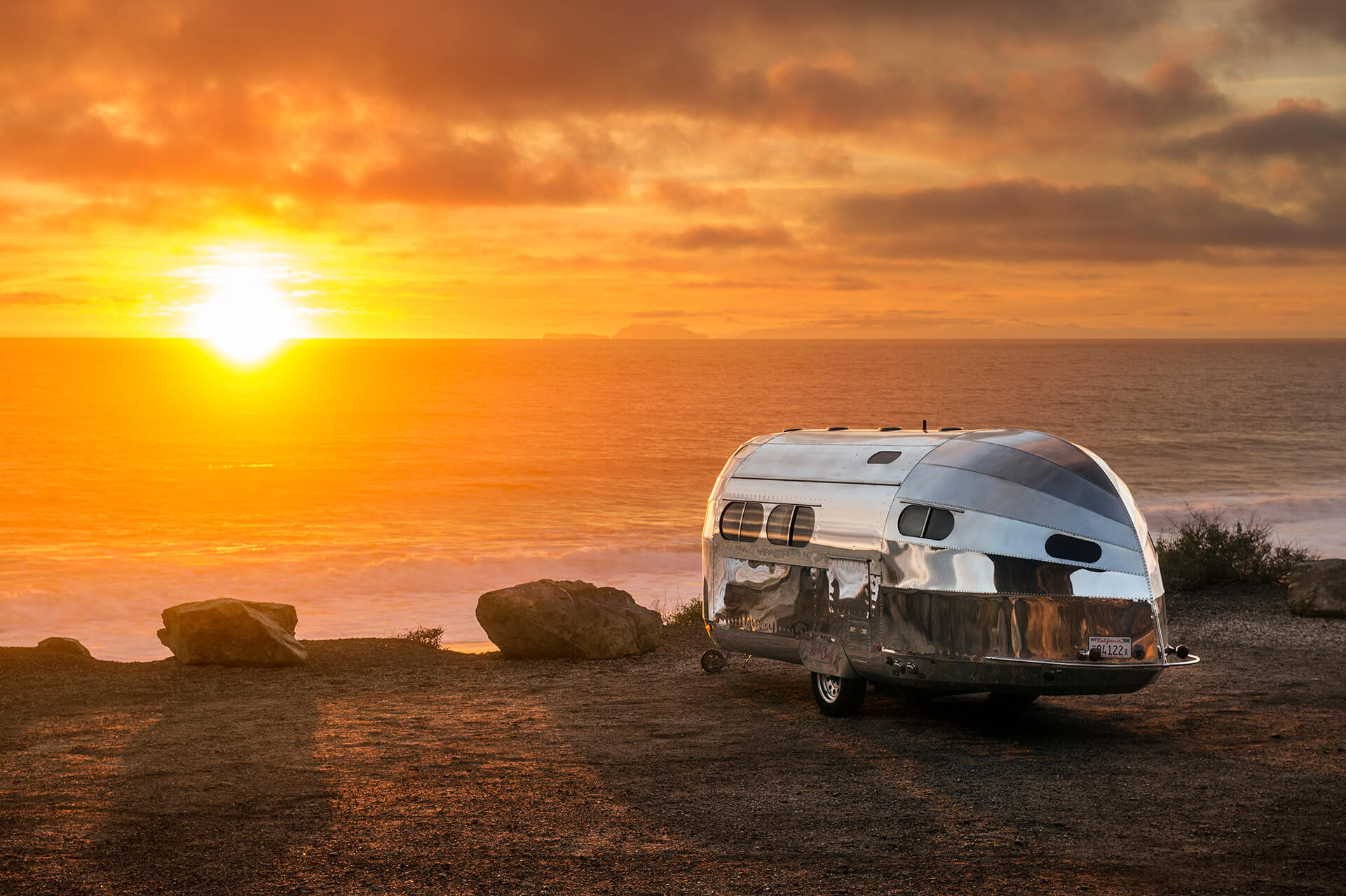 On the inside, the Bowlus is more compact than our Airstream…

On the inside, the Bowlus is more compact than our Airstream but more efficiently laid out and more comfortable. It has a lounge area that is very comfortable. In contrast, we were never able to get comfortable in our Airstream’s seats, and it lacked a lounge area. The Bowlus has a cassette toilet that is, in my opinion, preferable to the “stinky slinky” of the Airstream. The fresh water tank and the grey water tank capacity is less than the Airstream but we have been able to manage without any difficulty. The refrigerator is a little smaller than the one in the Airstream but is vastly superior in terms of performance. The cook top also performs better than the one we had in the Airstream. The Bowlus heating system is wonderful – quiet and efficient. It heats the water and the floors – having a heated floor is truly wonderful on a cold morning! The built-in AC system is quiet and very efficient.

The build quality of the Bowlus is truly amazing and vastly superior to the Airstream. It has a fully boxed aluminum frame and the outer skin is 2024 T3 alloy, the same used in modern aircraft fuselages and much more robust than the aluminum of the Airstream. The attention to detail and the quality of the components is much better than an Airstream.

This just scratches the surface of the differences between the Bowlus and a comparable Airstream. If I had to give an overview I would say that the lightweight of the Bowlus is the biggest differentiator aside from the superior quality. It’s hard to appreciate what a difference the lightweight makes until you’ve had a chance to tow one. Some Airstream owners might think that the more compact size of the Bowlus would make it a non-starter, but in fact we’ve found the Bowlus all around far superior. 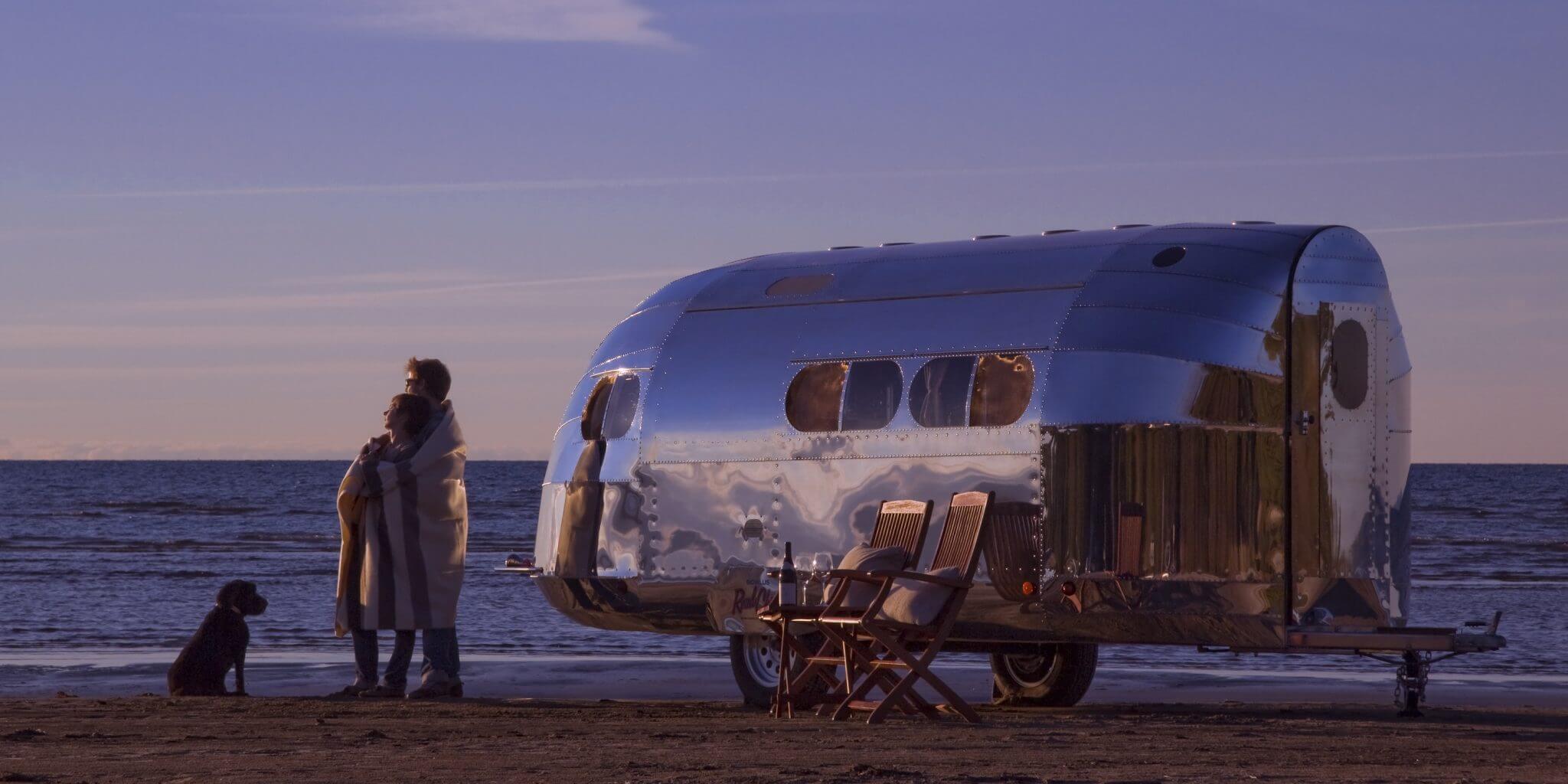 When looking for the perfect travel trailer, here are a few of the criteria…

When looking for the perfect travel trailer, here are a few of the criteria that were most important to us:

Needless to say, the Road Chief hits all the highlights. 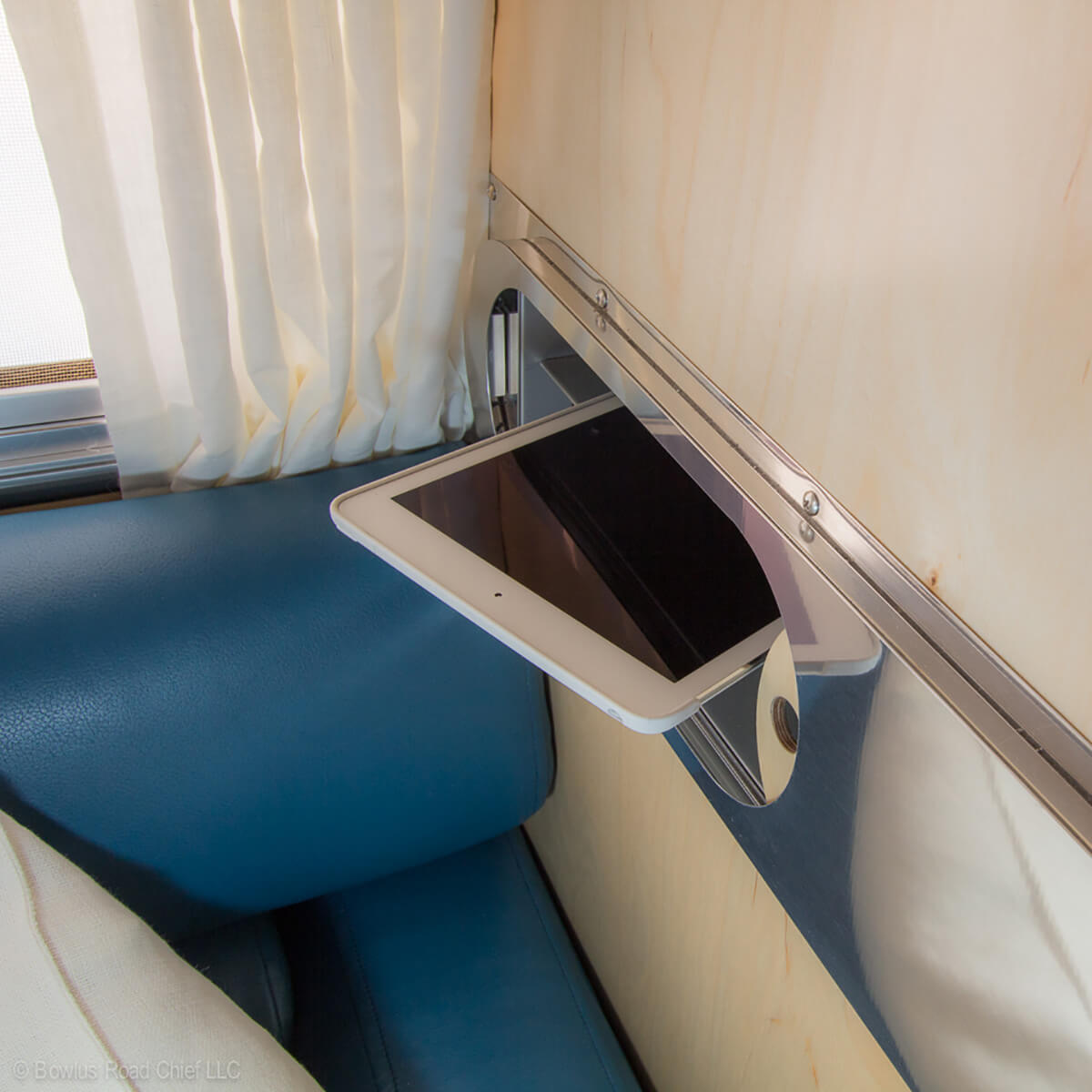 We really appreciate the subtle integration of technology.

We really appreciate the subtle integration of technology. We love that our Road Chief doesn’t have a TV screen, but also appreciate being able to flip on the cell booster and attend to business when on the fringes of cell reception. Also love that there is place for everything – we have everything we need without the visual clutter or wires/chargers.

What impressed us most was our visit to the Workshop and Design Center: wow! The Road Chief really lives up to the press. The care and thought that was put into the design and execution blew us away. Really, every little detail from a design and function standpoint has been thought of and beautifully executed. This kind of attention to detail and care is a rare find these days. 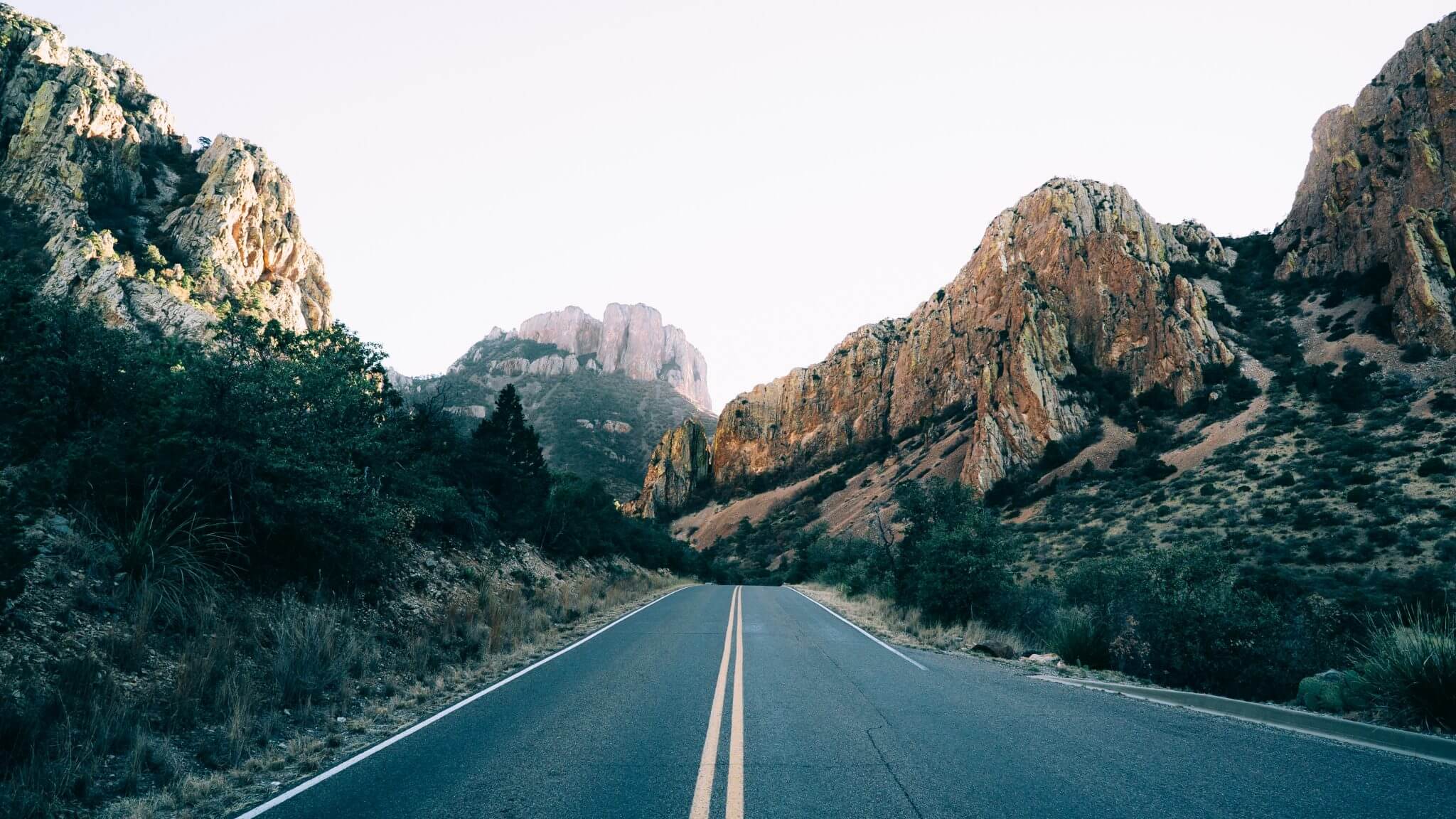 We just got back home in Texas from 10 days in the Berkshires.

We just got back home in Texas from 10 days in the Berkshires. Our Road Chief towed wonderfully the entire 4,000 mile trip. Very pleased with our purchase. 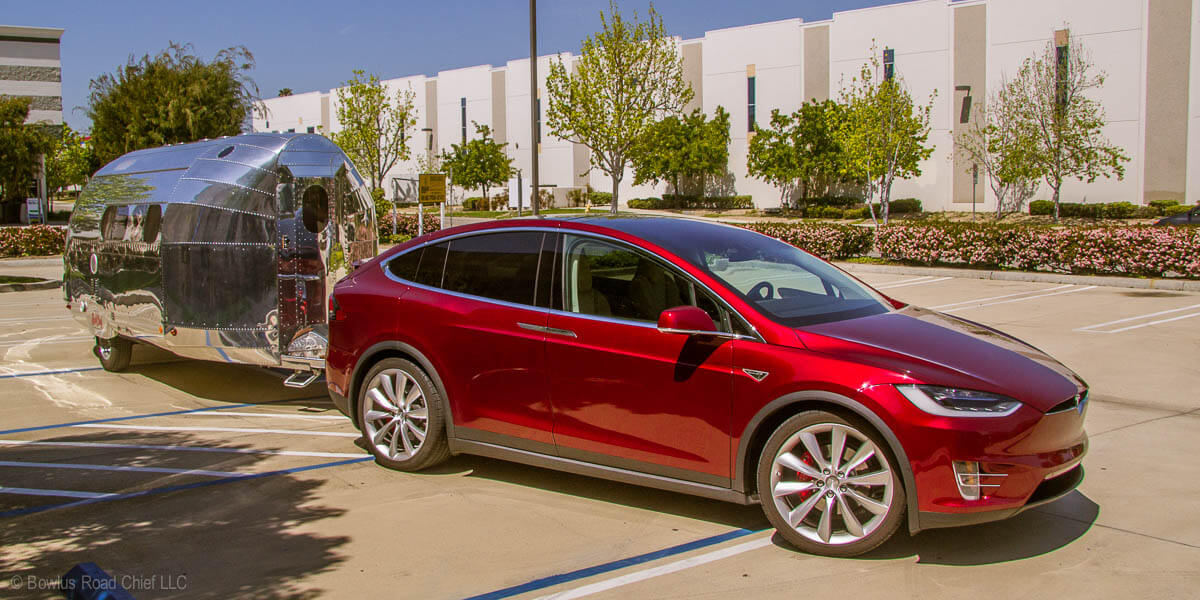 I was a total newbie at towing…

I was a total newbie at towing anything but quickly adapted to driving with the Road Chief. You really do almost forget it’s there. The first day out we encountered some gusty side winds, and the Road Chief was unfazed so I was at ease. When traveling the size and maneuverability lets us stop pretty much anywhere we would like to. It really is so easy to hitch. I’m not a big person and have easily hitched and unhitched it by myself with ease. Even took a solo retreat to a Scandinavian spa in Whistler, B.C. 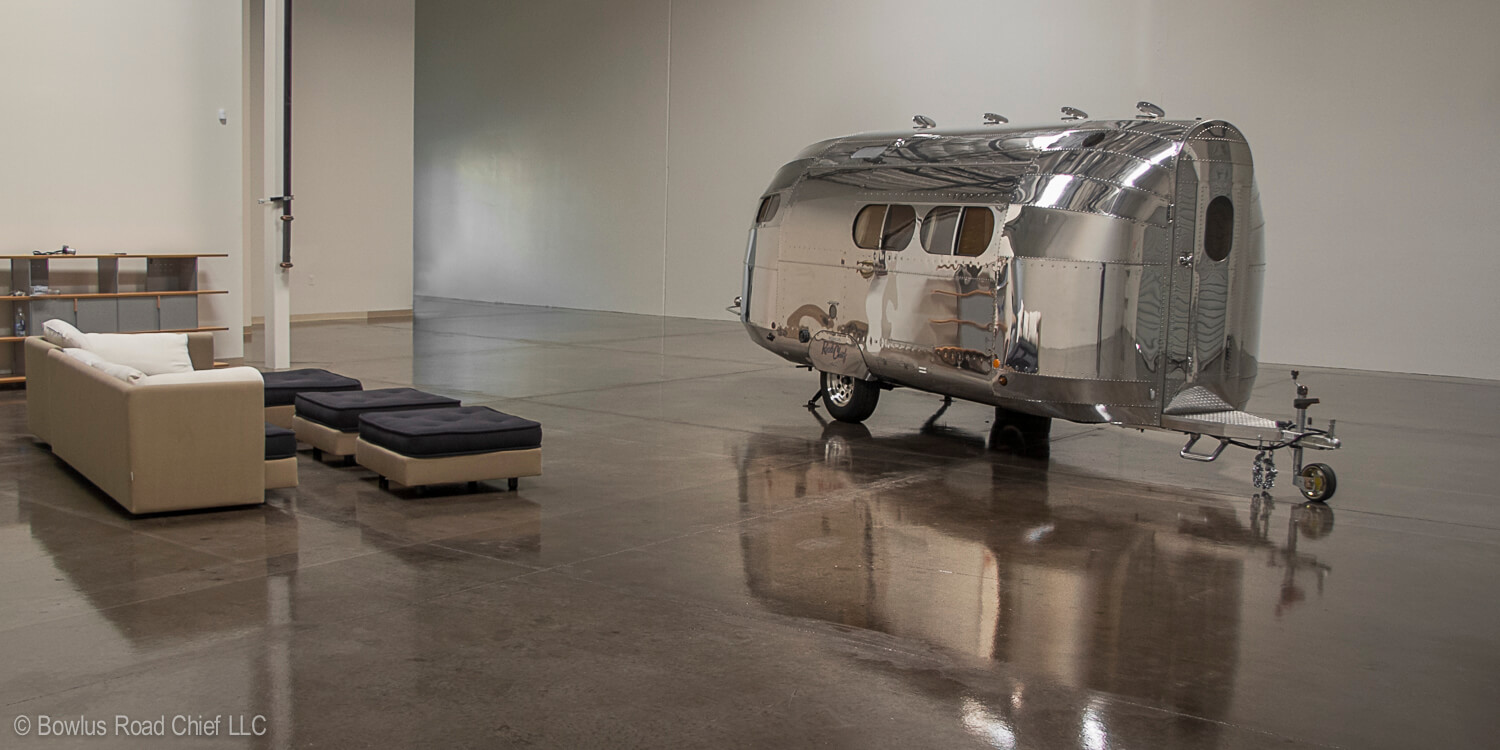 We had an incredible visit to the Bowlus Showroom in Henderson, Nevada.

We had an incredible visit to the Bowlus Showroom in Henderson, Nevada. It was so awesome to experience a Road Chief in person. My husband thought it would be tight inside based on the photos (he’s 6’2″ and 200+ pounds), but we both found it incredibly roomy. We didn’t want to leave – we loved it! The visit itself was really informative and it was fun to see an original 1935 Bowlus Road Chief. You really can’t compare this to visiting a regular RV dealership. We’re so glad we made the trip. 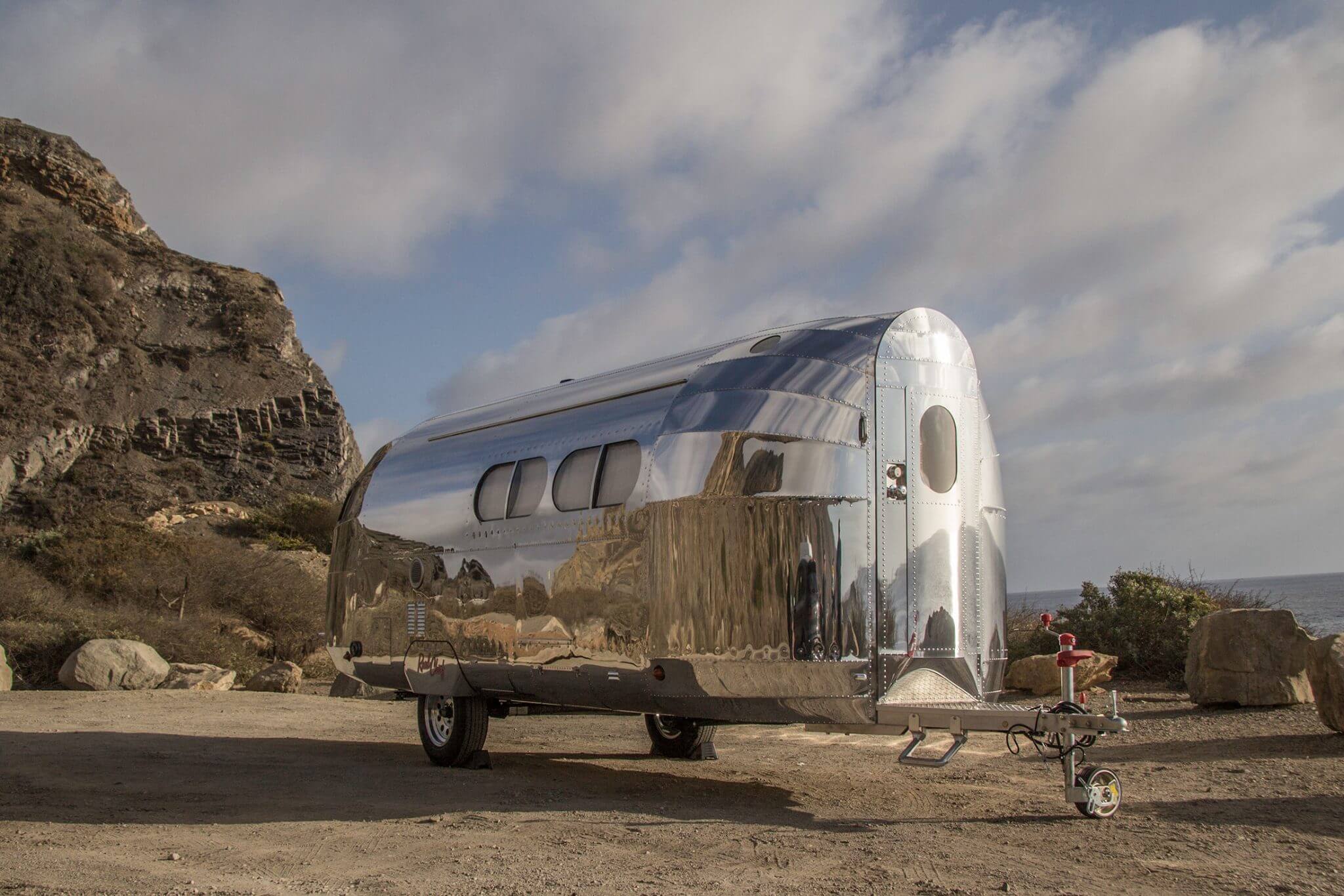 I first looked at the Road Chief website after seeing the high praise in the Wall Street Journal.

I first looked at the Road Chief website after seeing the high praise in the Wall Street Journal. I remember going to the website and poring over the photos and diagrams, trying to figure out exactly how this was all put together and worked. The website piqued my interest and prompted me to pick up the phone, but really what sold us on the Road Chief were our interactions with the Road Chief team on the phone and at the Workshop and Design Center – and, of course, seeing it in person. 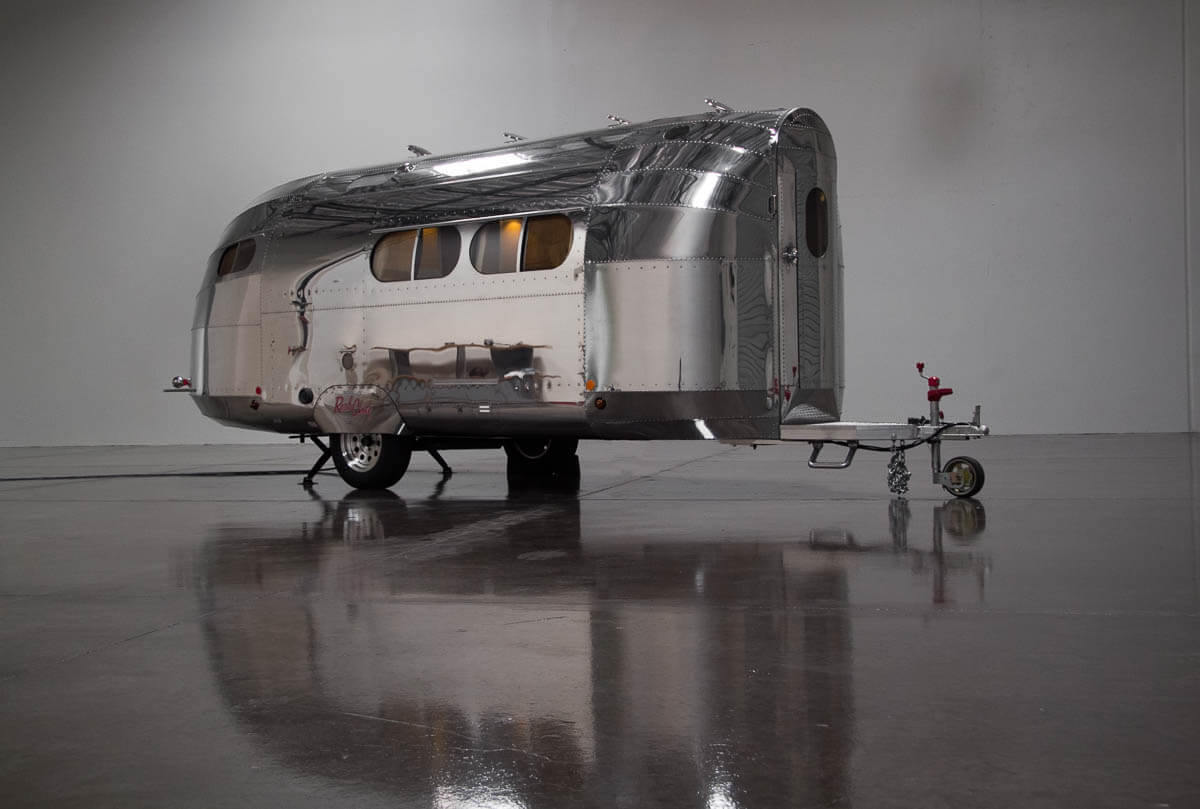 Our Road Chief arrived in perfect shape right on time last evening!! We are excited to show the East Coast this awesome RV! Thanks so much. Your Sales Team is ***** (5 Stars). 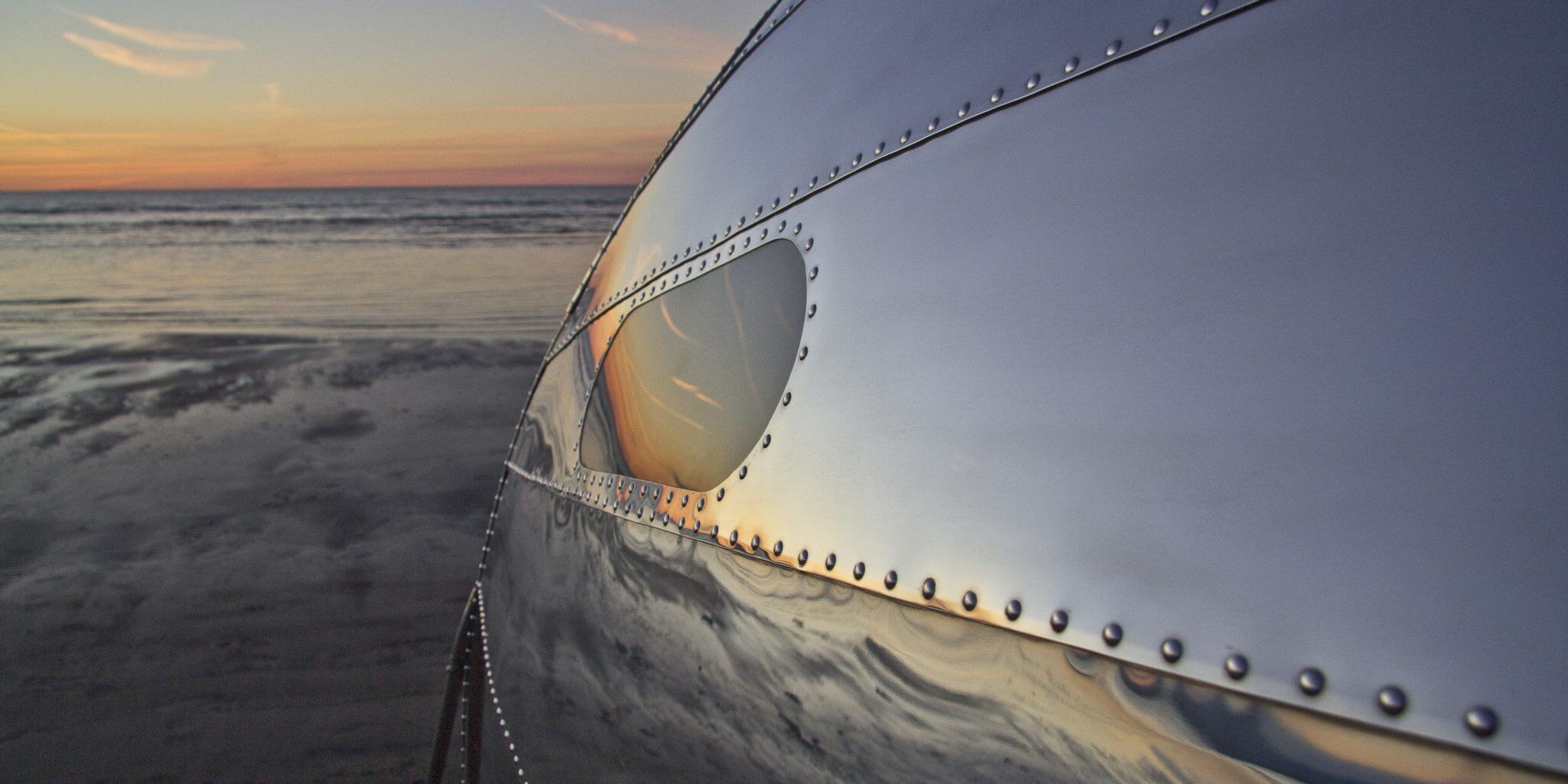 I started looking at airstreams some years back.

I started looking at airstreams some years back. My intention was to create a mobile lifestyle where I could easily spend prolonged periods of time away from my home base. I’m a painter and enjoy going places to get inspiration for new art pieces.

In my online trailer searching I ran across the Bowlus website and was impressed. After a visit to their showroom in Henderson Nevada I was convinced that it was the best made travel trailer I’d seen to date. As an owner I’ve had plenty of opportunity to see that to be true. I’ve gotten to compare with other trailers out there and only gotten confirmation that I made the right choice. The quality of building materials really are something unique. The aerodynamic design is something that resembles that of an airplane and the use of 2024 T3 alloy(same used for aircraft today) underscores that beautifully. The ease of hitching up and towing are in my opinion unrivaled.

I picked up my trailer on November 1st 2017. From then to now I’ve gone on numerous camping and road trips. It is such a pleasure to tow and so comfortable to relax and sleep in. I’ve taken it from The west coast all the way to Miami and back, several road trips from Seattle to Palm Springs and last summer a trip to Wyoming, and to numerous short distance camping areas in Washington state in the past year….and I’m just getting started. I’ve got my sights set on several national parks over the next year and lots of local camping. I have no problem spending prolonged periods of time in my trailer. I could live in it just fine and be ready to hitch up anytime the road calls.

I’ve made breakfast for 4 other friends in it and several have camped in it with me before. This trailer is built to give a lifetime of memories and that is my intention.” 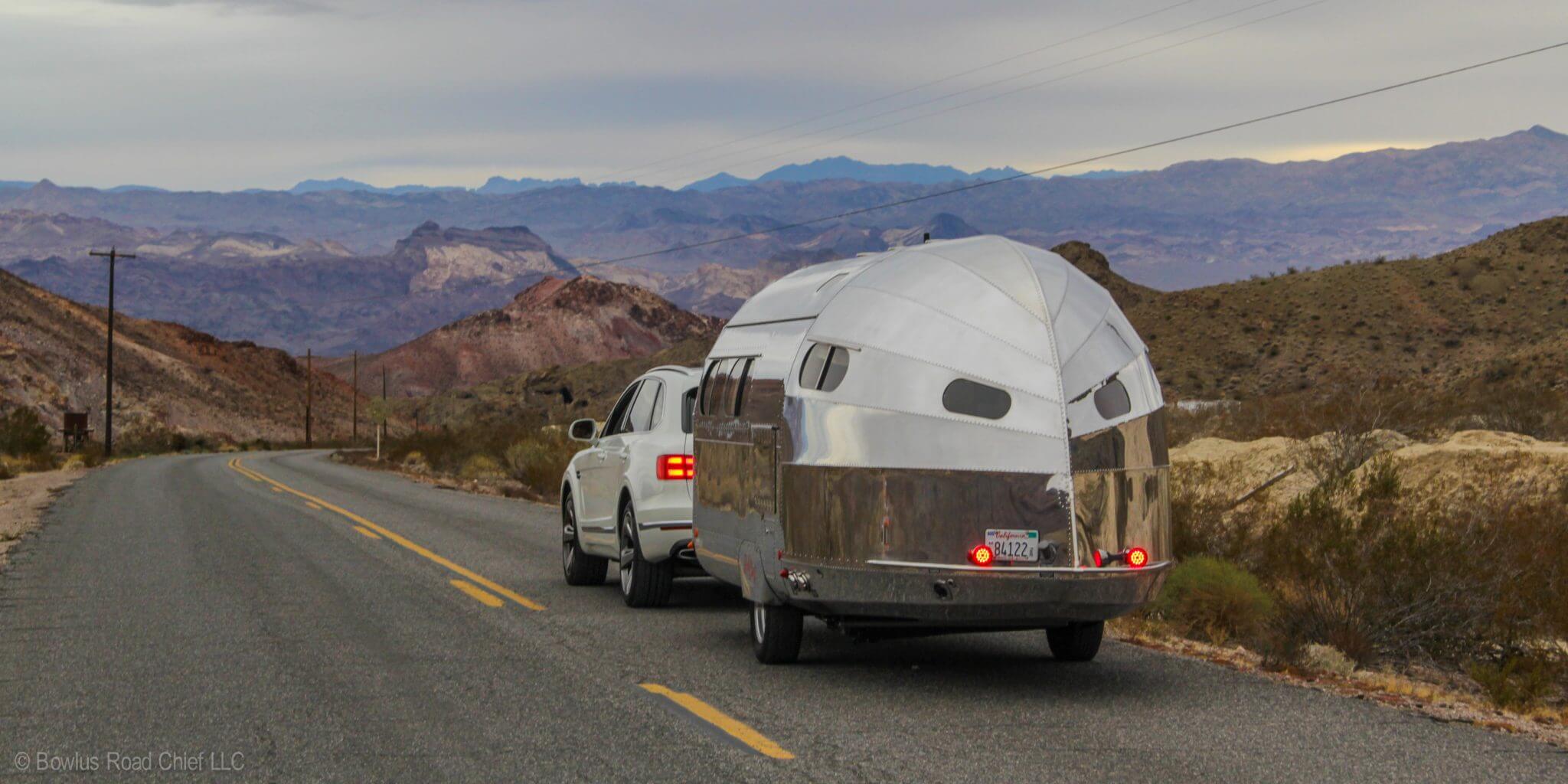 We were looking for a light, easily towable trailer…

We were looking for a light, easily towable trailer and came across the Bowlus. We made a trip to the show room in Henderson and were very impressed, it ticked all the boxes. Next we visited the factory and that pretty much sealed the deal.

The quality of the build, the ease of use and the zen like feel of the bedroom and interior cabin can’t be overstated. Towing and setting up are incredibly easy, as are using the appliances and controls inside. No loud furnace to annoy you, just the soothing heated floors and radiant heat that make the inside so comfortable. We have been on short and longer adventures, to the mountains, the deserts and the beach, and have had an amazing time on all of them. We even crossed paths with another Bowlus in Santa Maria which was very cool. We have many more trips planned and there isn’t a better way to travel then in our Road Chief.” 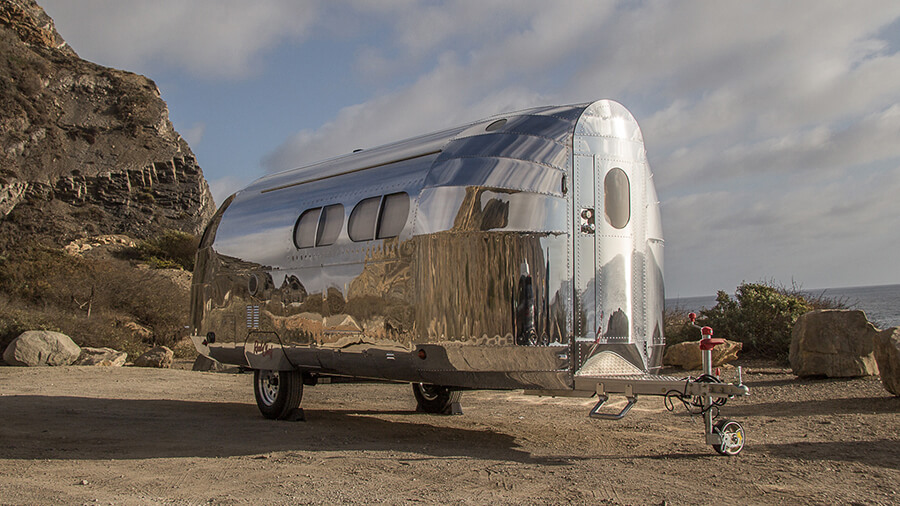 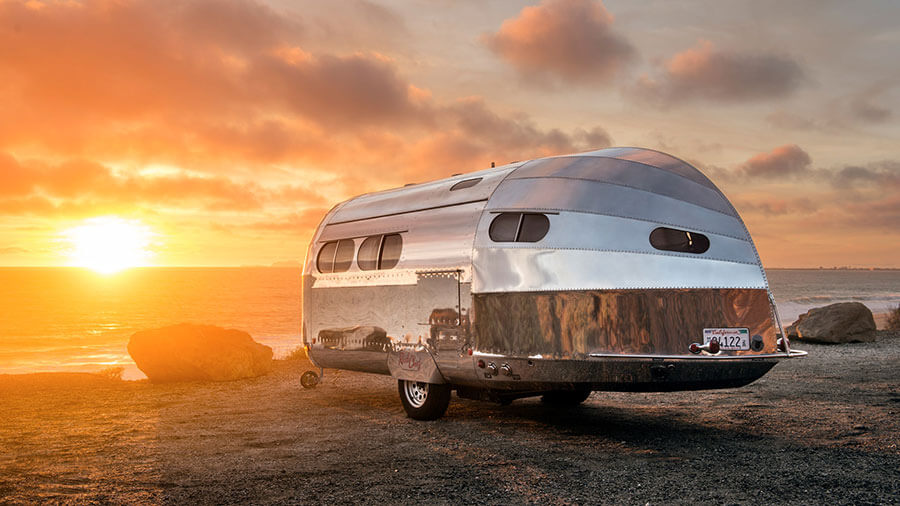 Which Road Chief Is Right for You?

Our insider’s’ tips and favorite locations so you can plan your very best off-grid (without hookups) camping adventures.

Submit this form to receive your National Parks Guide link in your email.